The first KISS tune I ever heard was in a rock and roll bar on campus. The band playing was called something like the Pelican Peace Band, but they rocked out on I Wanna Rock and Roll All Night. I was instantly hooked on KISS.”

KISS was undeniably the flashiest act of the 70’s, and many would say they still are. Fire breathing, blood dripping and spitting, kobuki-style makeup, weird costumes, all good stuff (unless you experienced their show while on a bad acid trip). It was a great live act. However, the band was solid musically as well, with hard driving rock that would shake you down to your toes. Many of their songs were obviously written to enable their live-show theatrics. The lineup for the 70’s was

Gene Simmons – base and vocals

Trivia: KISS had a made-for-TV movie called KISS Meet the Phantom of the Park. Something about a haunted theme park. Probably won’t go down in history as one of the best plots, but hey, it was KISS. 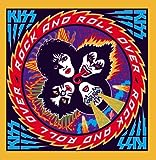 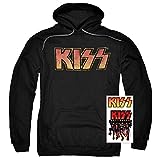 Rock And Roll All Nite: The Music Of KISS (Paperback) 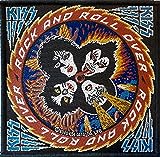 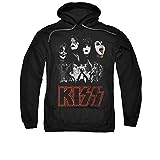